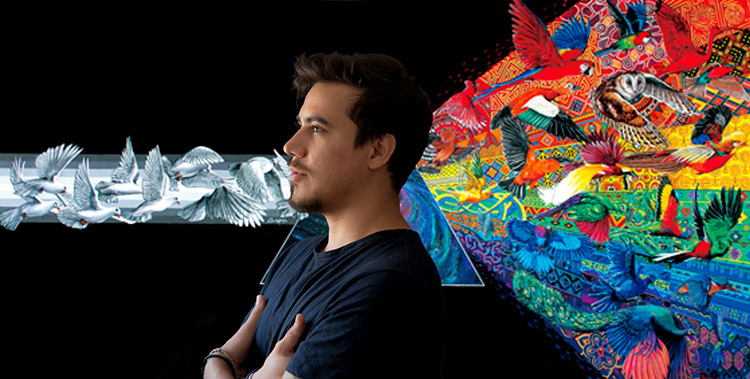 Camilo Arias is a Colombian innate visual artist. He is 31 years old and has a degree in audio-visual media from the Politécnico Grancolombiano University of Bogota and holds an international accreditation in 3D creation and animation. Manifestation” was his first solo exhibition back in Panama 2012. He has a large experience as a muralist. So far he did several murals in Colombia, Panama, Egypt, Barcelona and Iceland. He participated with the Embassy of Panama in Egypt by intervening photographs with acrylic for an exhibition in 2015. “Latinograff” was his second exhibition, which was a collective display within the framework of an exposition held in different cities of France in August 2017. The psychedelic scenarios of his paintings, where the human beings roam around history and society, contrast with the tropical colors of their nature and reveal the dualism between the biological beings that we are and the alienated humans in which we are nowadays being transformed into.