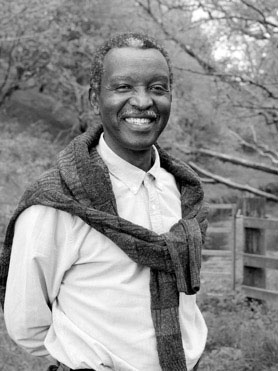 Sanaa Gateja is an artist gifted with an attitude and extraordinary relationship with the material he uses.
Painter, designer, teacher and innovator, he is also social entrepreneur, because he recycles the paper which he transforms into pearls, giving means of subsistence to thousands of people, especially women and youngsters. Sanaa represented Uganda to the 1970 Osaka International Exhibition in Japan. He then joins Mombasa in Kenya, where he began his career in Art and Design.
From 1982 until 1983, Sanaa took a Jewelry Designer training class
in Florence, Italy. He pursued College in London, where he was member of the British Crafts Council and an active member of «Diaspora Artists» in the United Kingdom. Sanaa organized exhibitions in Royal Festival Hall SouthBank with Artists of the diaspora.
Sanaa solo exhibition called «The Home Coming» in the Africa Centre Covent Garden, celebrates the Uganda liberation in 1986. A few years later he returned in Uganda and created the Arts and Design Center Kwetu Africa.
In addition to being known for his involvement in design and trade, Sanaa is a pioneer artist from Eastern Africa, exhibiting in Uganda,in the National Museums of Kenya, also present in prestigious Art Auctions Houses like Piasa – Paris.