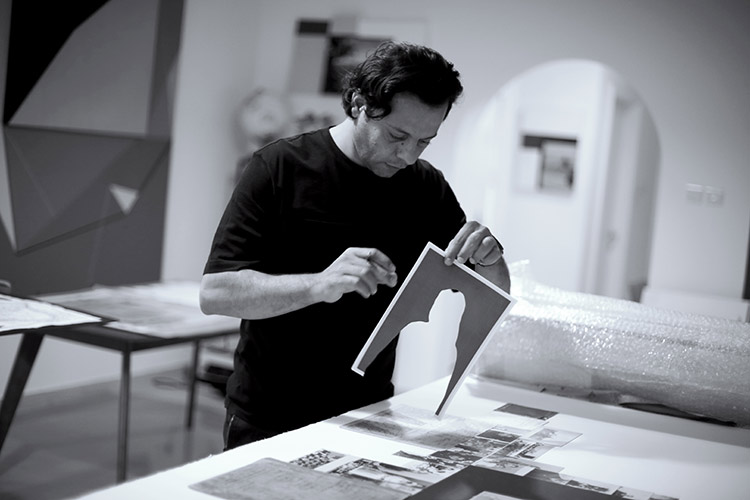 Born in 1980 in Gaza, Palestine, Hazem Harb currently lives between Rome and Dubai. He completed an MFA at The European Institute of Design, Rome, Italy (2009).
The artist works in an underlying register, his works primarily concerned with the historical past of his country and its place in the current day. Harb’s use of collage allows him to construct a discourse that did not previously exist or was at least hidden. The artist imbeds old photographs and archival objects within his works, often rare pieces of the past that he cuts and inserts into conceptual compositions. Both the result and the approach relay a hidden story, the use of genuine historical sources summoning the past to the present – a solution proposed by Harb to reaffirm and reestablish the cultural and physical existence of his people.
Amongst his accolades, Harb has been awarded residency at The Delfina Foundation, London; Cite des Arts, Paris; and Satellite, Dubai. In 2008, he was shortlisted for the A.M Qattan Young Artist of The Year award. His work has been collected by numerous institutions, internationally, including: The British Museum, Sharjah Art Foundation, Centre Pompidou, The Oriental Museum (Durham University), Salsali Private Museum, LACMA, Faurschou Foundation Copenhagen, Al Qattan Foundation, and Contemporary Art Platform: CAPKuwait.
SELECTED SOLO EXHIBITIONS
Power Does Not Defeat Memory, Sabsay Gallery, Copenhagen (2019); The Everlasting Presence of an Excluded Memory, Art Berlin (2018); The Invisible Landscape and Concrete Futures (curated by Lara Khaldi); Salsali Private Museum, Dubai, (2015); Al Baseera, Athr Gallery, Jeddah (2014); I Can Imagine You Without Your Home, Dubai, UAE (2012); Is This Your First Time in Gaza? The Mosaic Rooms, AM. Qattan Foundation, London, UK (2010)