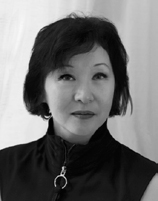 Born in 1969 in Almaty, Kazakhstan, Menlibayeva is a multi disciplinary artist who practices across several mediums such as painting, graphic art, performances, installations and video. In this exhibition, she uses her chosen mediums to reflect on cultural transformations of Central Asia, particularly Kazakhstan.
Her focus is on post-Soviet social issues, with a feminist slant. The female protagonist is at the core of her practice, and through her striking and sometimes provocative compositions, she attempts to carve a space for her gender within the new cultural framework of post- Soviet Central Asia. Her women are invariably glamorous, well dressed and stylised, strong and powerful. Menlibayeva also introduces the ecological crisis of modern civilisation in her projects. Her subjects are placed in and around the Aral Sea, which was once the fourth largest lake in the world but now is almost dried up since its river sources were radically diverted for agricultural irrigation.